The Migration to Android OS 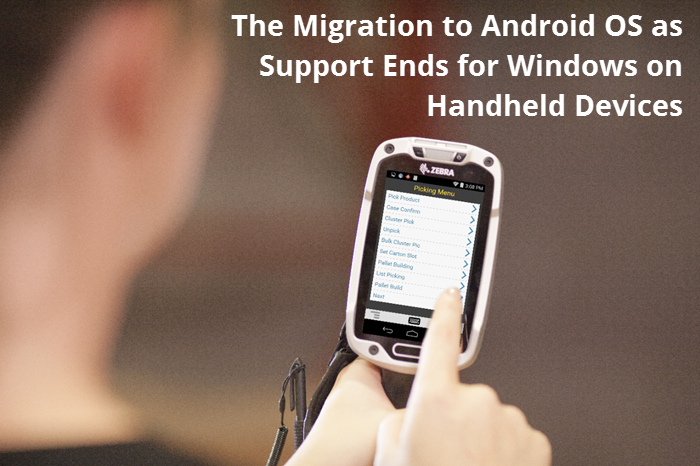 Within the next five years, companies using handheld devices, will move from Windows to Android Operating System in one of the biggest industry platform shifts ever. Windows Embedded CE version 6, debuted in 2006, represents a majority of all embedded devices’ operating systems. There are millions of handheld devices that delivery people, store clerks, and warehouse workers often carry to manage inventory, process orders, and verify delivery. These devices are most commonly found in:

Microsoft's coming end of support for Windows Embedded is forcing the industry to look elsewhere.

“End of support” means that Microsoft will stop issuing security patches and software updates. Any company still running Windows software on its devices will be left with no easy solution to defend their system from viruses, fix software bugs, or add new apps.

As a result, developers and device makers need to rewrite their apps for a new OS before the deadline. This can be critical since there are so many devices used in regulated environments.  Here are the scheduled dates for “End of Life”:

Any business currently using devices with Windows CE or Windows Embedded Handheld should start to plan for the future.  Depending on the size and complexity of your business, a solution may not be simple nor cheap. Preparing your upgrade strategy now will prevent headaches later and more importantly won’t interfere with your business.

There is a trend to use Android as it is a flexible and capable OS solution. Android makes the transition easier since it is familiar to many users. Android is also said to be easier to develop on, making it a common platform for a range of applications.

Some of the most popular devices in use today are already running Android OS.

We have partnered with Zebra technologies to roll out of this new technology. Since nearly all handheld devices run on the Windows operating system, we expect a demand for resources.  Changing and migrating to a new platform can seem overwhelming, but we can help avoid business disruptions and ensure a successful transition.

Fortunately, a new OS, the right devices and modernizing your apps before the 2020 end of extended support date will offer many productivity and cost advantages.

Let Us Design A Complete Solution For Your Needs.